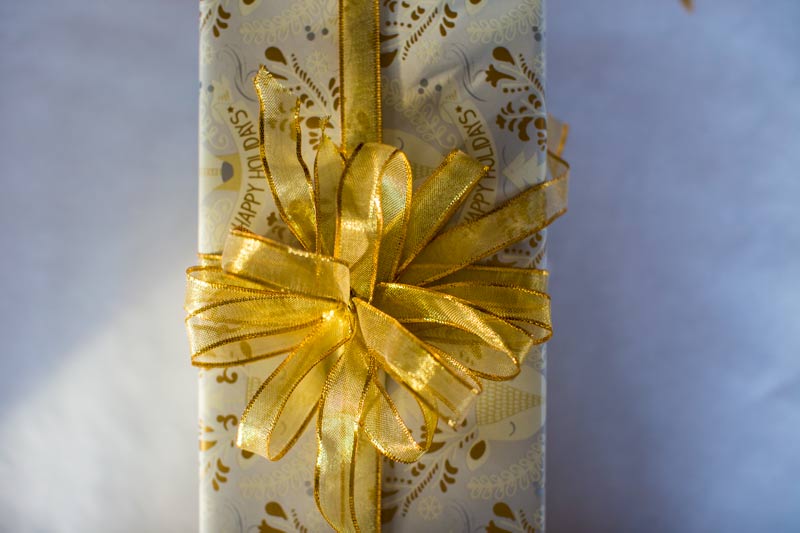 up your gift wrapping game: how to tie a bigger, better bow

We take gift wrapping pretty seriously in my family. My Grandfather was a gift wrapping purist, no fancy printed paper or stick-on ribbons, for him it was all about the execution of the wrapping itself. My Grandma liked to think about the big picture, picking a color scheme or design idea that would tie everything together. The best was the year we wrapped everything in basic brown kraft paper and then went wild painting and bedazzling each package however we wanted (which at age 5 meant skipping the brush because thats what fingers are for and of course lots of glitter).

This bow-tying technique reminds me of both my Grandparents and their crazy gift wrapping ways – nothing fussy or overly complicated but the result can be a real show stopper. 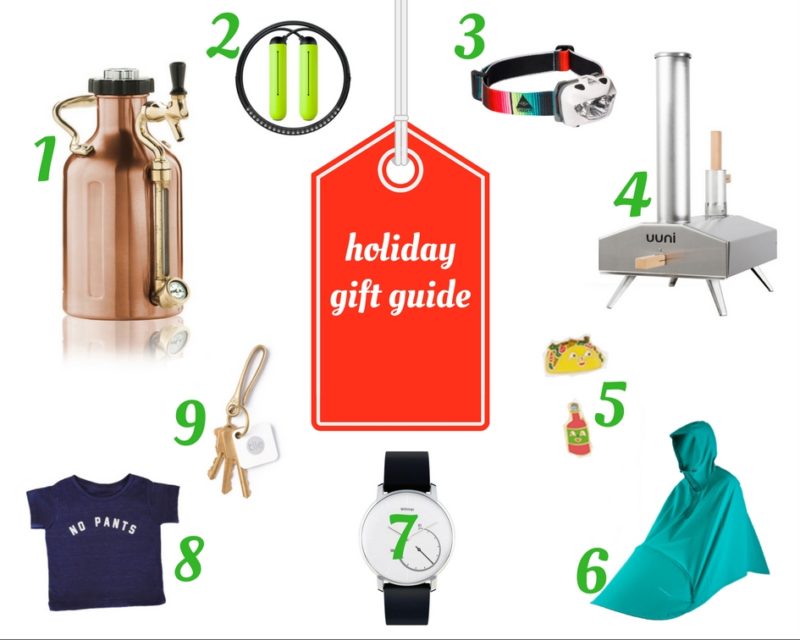 a wacky assortment of gifts ideas…

1. Copper Growler – This is the kind of thing people don’t buy for themselves because well it is highly impractical, it is rather flashy and it might suggest you are a tad too into large quantities of alcoholic beverages. But that is what gift giving is all about!! Amiright!!? Because despite all those things I just said that might make you wonder why it is on this list, don’t you still really kind of want it? I do. Its just so pretty and for those occasions when it is acceptable to have a mini keg in your fridge, wouldn’t you want it to be this one? Thats what i thought.

2. Play Smarter – A smart jump rope seems like a bit of a one trick pony to me and I personally dont feel the need to know how im jumping or double dutching. There are so many cool gadgets and gizmos for any and every sport – we are all going to be so super fit starting in january right? yeah. january.

3. Swanky Head Lamp – What I love about this particular head lamp is how its practicality is somewhat disguised by the ridiculousness of the band. Im pretty sure we have given my dad a head lamp at least every other year since I can remember – why you ask? So that when he is standing outside in the pitch black, freezing cold grilling hamburgers while the rest of us keep warm inside, he can see what he is doing while also keeping both hands free (in case a bear comes up from behind having smelled grilled meatiness). A pretty self-explanatory gift really.

4. Super Snazzy Pizza Oven – This thing looks badass. Also kind of dangerous so don’t give it to anyone prone to clumsiness around the kitchen or forgetfulness as in your pizza will be on fire. But for your responsible, pizza-making friend, how awesome would this be.

5. Taco Earings – The taco earing would pair quite nicely with my new taco purse.

6.  Boncho – I have been dying to get my brother this since he just moved to Seattle and is a bike buff (meaning in his apartment he has not one but two bikes because god forbid you ride a mountain bike to work or something). But he also lives two blocks from work so the brilliance of this tent/raincoat is lost on him but for your bestie biker who rides to work this could be quite handy (and good for a few laughs).

7. Withings Watch – Finally you can track your activity level (or lack there of) much more stealthily and stylishly. And it tells the time! Now thats what I call a two-fer.

8. No Pants Shirt – I have to say I am a little bummed this doesn’t come in my size but its a pretty darn cute gift for mamas to-be.

9. Tile Key Locator – Pop this tiny little thing on your key chain (or slip it in your wallet like a credit card) and you will never have to turn your entire apt inside out looking for the keys that are in your pocket. Or left in the door…not that I’ve done that or anything.