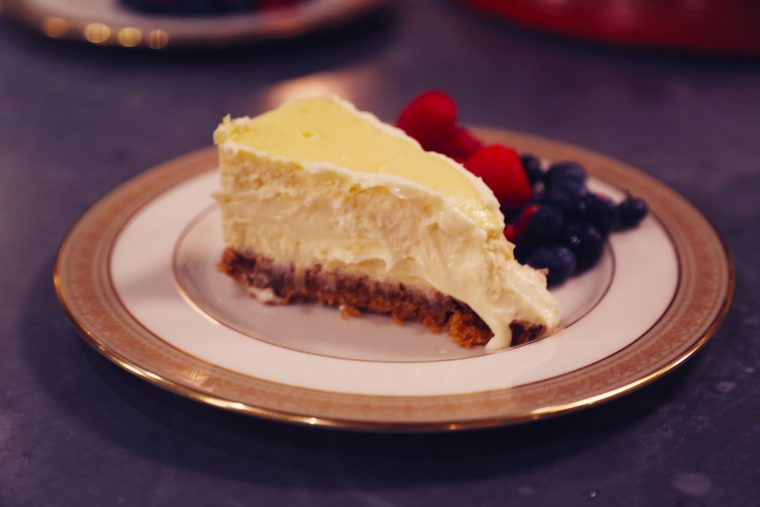 It has been quite a while since my last post and I have no excuse other than it is summer and sitting inside on a computer when not absolutely necessary just seems unnatural.  But I could not let the entire summer pass without letting others in on my decadent cheesecake secret.

This is the lightest and yet somehow creamiest cheesecake I have ever had (much less made).  It is exactly what I want to end a perfect summer meal, the brightness of the lemon makes you feel a little less sinful having a second piece.  It also goes perfectly with fresh summer fruit – any reason to eat another juicy peach before their painfully short season is over. This recipe does require some advanced planning because if you don’t allow the cheesecake to fully set, you may find yourself serving it out of a bowl instead of from a cake platter (as I did earlier this summer…see below photo evidence). I was making the recipe for the second night in a row, a somewhat last minute impulse of a lazy saturday afternoon.  As I cut into my beautiful masterpiece, half of the cake began a slow-motion landslide of creamy sludge, heading for the edge of the cake platter.  I managed to get a bowl under it just as the rest of the cake gave way, oozing in every direction and causing a chaotic scramble to get every morsel off the counter and into a bowl.

Let me just say, looks are not everything.  Once I let my OCD horror go and took a few deep, cleansing breaths, I fully embraced the delicious disaster. I don’t know if I would recommend this method of preparation but if you are pressed for time, it is still worth making… just have some bowls at the ready. Spatchcock Chicken on the Grill